There are many reasons to observe EBs. First, it is fun to see a star undergoing brightness changes in just a few hours, and sometimes, changes of the orbital period in just a few years. Next, observing a star provides a context for learning about the star and how to analyze those observations. Finally, one may wish to contribute observations that might be scientifically useful in increasing humankind's understanding of all stars. The discussion here will focus on the latter, both what stars to observe, and what observations to make.

Firstly, there is no real "right" answer to 'what is the best thing to observe?'.  We never really know what new observations will reveal. However, we can play the probability game, and exclude observations that most likely will not be useful.

Scanning the databases of times of minima, e.g. at Cracow, and the LkDB, and the frequent publications of newly recorded times of minima such as those in JAAVSO, VSOLJ, and OEJV, the overwhelming majority of the reported observations are now being made with CCD cameras, with a demonstrated accuracy approaching 0.0001 days, and generally better than 0.001 days. In this flood of high accuracy data, lower accuracy observations will likely be ignored by researchers.  There have been some recent papers that dismissed all ToMs derived from visual observations, even from dates before any photoelectric data was available. This unfortunately means that new eclipse times deduced from visual observations are of much less interest to researchers than they used to be. They are still useful when monitoring a star of unknown period or phase, i.e. when 'scanning' to find an eclipse whose time can then be used to schedule higher accuracy observations.  This O-C diagram for W UMa (which was screen captured from the BAV's LkDB site) tells the story.  Visual ToMs (green and yellow) show far more scatter than CCD observations (red and blue), although the latter include some clearly erroneous observations. 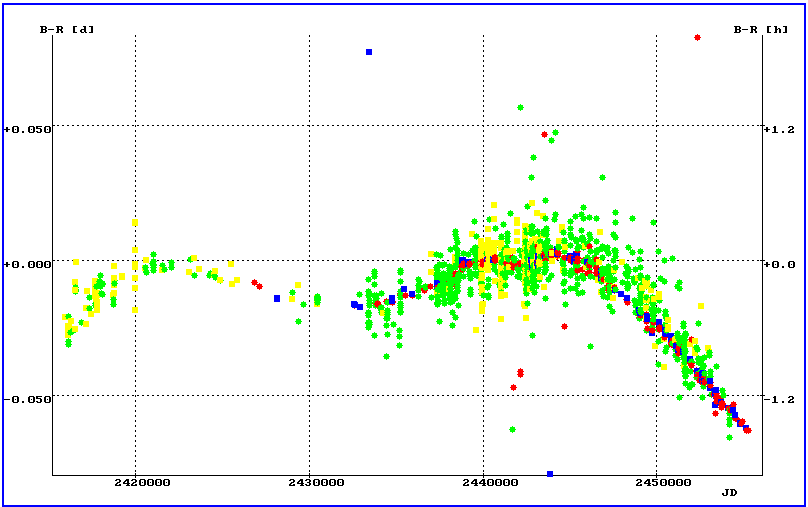 Of course, another factor to consider is whether the star is already being heavily observed.  For most purposes, on most EBs, a few ToMs per year suffice.  An exception would be intense monitoring to attempt to detect fine scale period changes or the effects of starspots.  Such an observing program would have to strive for the utmost precision.

The next factor is, "is this an astrophysically interesting star?".  That is extremely subjective, and there is always the possibility that a believed-to-be-ordinary EB might have some exciting characteristics revealed only by more study.  The EBs most studied in detailed papers by professional astronomers tend to be those where the stars in the binary are unusual.  E.g. an intrinisically variable star whose physical properties can be determined better than before because it is one of the stars of an eclipsing binary pair, or one or both stars are of rare spectral types (sitting on portions of their evolutionary track in the H-R diagram that stars move through quickly), or stars whose measureable properties provide a senstitive contraint on stellar modelling theory.  It is hard to assess these things as an amateur astronomer, except to take note of what papers are published in the more prestigious journals, and to consider avoiding types of stars that have been extensively studied as a large population by a paper using data from a big survey.

Finally, it has been said that "the best stars to observe are those that have been observed the most".  This seems paradoxical given the preceding, but humankind is just starting out on its quantitative observations of stars:  it is important to build out our time series from the mere 50 or 100 years we have on most stars, so that we develop long and detailed histories of at least some stars.   In addition, new types of observations of stars that have been followed for a long time are useful.  This website's pages on Legacy EBs, and EB Photometry, address these.