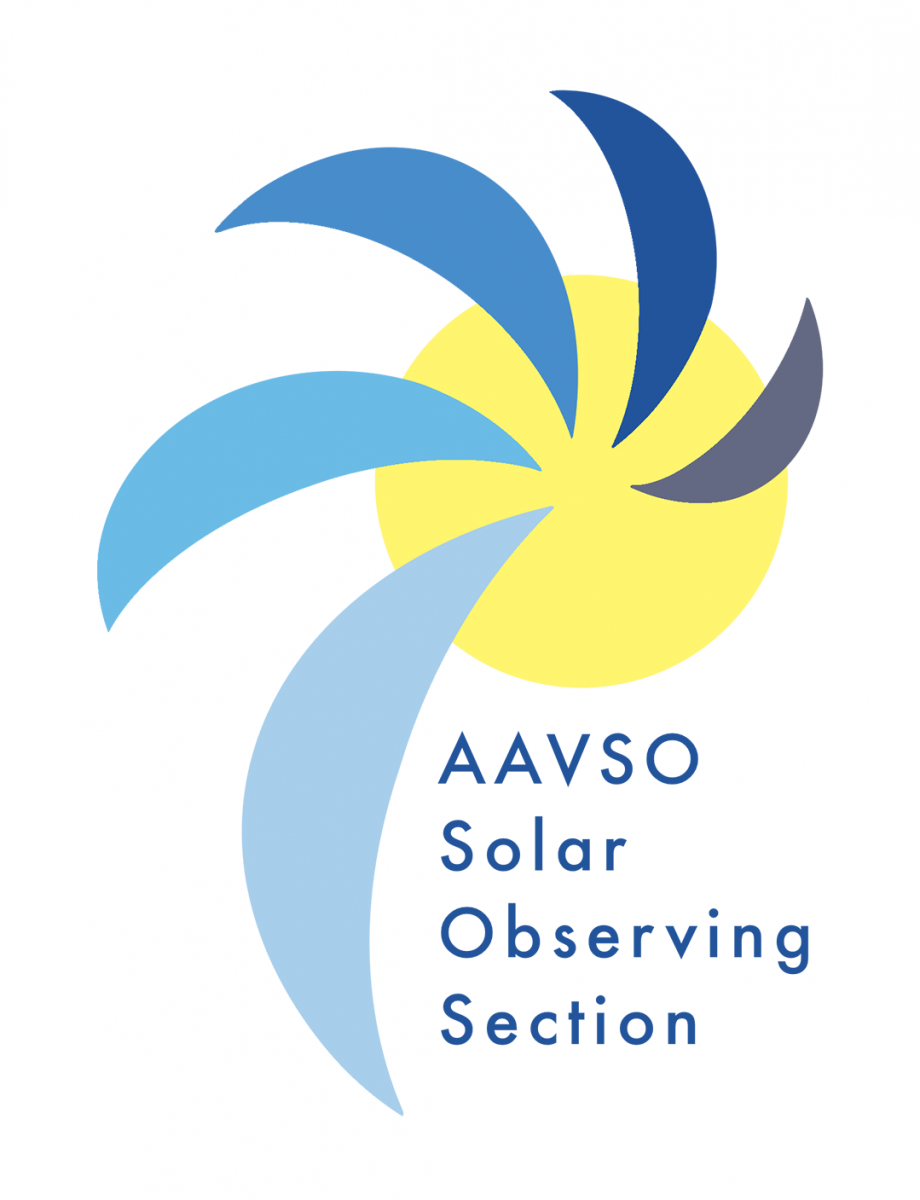 Welcome to the web pages of the AAVSO Solar Section, a world-wide group of observers dedicated to observing the closest variable star in the sky --our own Sun! On these web pages, you'll find information on who we are, what we do, and how we contribute to the scientific study of the closest star in our sky.

Who we are, and what we do

The main activity of the AAVSO Solar Section is the monitoring of sunspots from which the American Relative Sunspot Numbers (RA) are computed. This program was started in 1944 when the Solar Committee was first formed in response to the difficulty in obtaining formal sunspot counts from Switzerland during World  War II. The AAVSO American Relative Sunspot Program produces an independent sunspot index for the use of solar researchers world-wide.

For many years the program based its results on the reports of a limited number of skilled observers in the United States. Today however, it has grown in size and sophistication. The program now benefits from the participation of over 100 amateur and professional astronomer collaborators on six continents, who provide continuous coverage of the Sun.

Those who participate in the American Relative Sunspot Program use relatively small instruments for sunspot observations. The sun is observed each clear day, and counts are made of the number of sunspot groups and the total number of spots. These observations are reported by the observers using the SunEntry tool which puts them into a database. The Chairman of the AAVSO Solar Section will then publish the results in the Solar Bulletin each month.

The statistical methods of analysis used for data reduction were devised by J. Virginia Lincoln and Alan Shapley (Shapley 1949) of the National Oceanic and Atmospheric Administration (NOAA). Their methods have been computerized, allowing for reduction of data on a timely basis. The data reduction technique is described in Taylor, 1985, JAAVSO V14, p28. The processing has been modified to account for a longterm inflation of sunspot numbers due to the repeated computation of observer-dependent coefficients first identified by Schaefer, 1997, JAAVSO V26, p40. These NOAA data from 1945 to the present are now available here on the AAVSO web site (comma-delimited text files):

For an interactive display of these data see the LASP Interactive Solar Irradiance Datacenter (LISIRD).

In addition to monitoring the Sun at optical wavelengths, a number of Solar Section observers monitor solar activity at longwave radio wavelengths by monitoring for and measuring sudden ionospheric disturbances (SIDs), caused when the Earth's ionosphere is affected by radiation from the Sun.  Changes in the ionosphere affect the propagation of very low frequency (VLF) radio waves, and we can sense changes in the ionosphere by monitoring the signal strength of a number of VLF radio stations around the globe. This is the SID Observing program.

Participating in the Solar Observing Program

To get started it is highly recommended that you read the AAVSO Solar Observing Guide.

Observers must submit their data by the 10th of the month following the month in which the observations were made. Observations can be submitted using the SunEntry program or via email to solar@aavso.org. After an initial review by the section Chairman, reports are processed and archived. The final values of the American Relative Sunspot Numbers are then computed and distributed to the National Oceanic and Atmospheric Administration (NOAA), subscribing universities, scientific organizations, and interested individuals via e-mail and the monthly newsletter, the AAVSO Solar Bulletin.

Participating in this important program is simple if a few details are followed. Important guidelines for visual solar observing can be found here.

The AAVSO Solar Section also includes the work of a smaller group of electronic observers who monitor very low frequency radio stations for sudden enhancements of their signals (Sudden Ionospheric Disturbances), and thus detect solar flares indirectly. Although this work was initiated in 1956 as part of the International Geophysical Year, only a few monitoring stations are presently located outside the United States, and so additional European and Asian locations would be particularly welcome. These flare patrol results are also sent to NOAA each month.

Sunspot indices and flare data are regularly published in Solar-Geophysical Data and other publications.

Information about sunspots and sunspot counting:

Many thanks to Skylar Larsen (AAVSO Ambassador and MIT Planetary Science and Astronomy student) for creating our logo!