Olin Jeuck Eggen (July 9, 1919 – October 2, 1998) received his Ph.D. in astrophysics from the University of Wisconsin (Madison) in 1948, working with Joel Stebbins and Albert Whitford on the light curves of Algol. His seminal paper in 1962 with Lynden-Bell and Sandage ("Evidence from the Motions of Old Stars that the Galaxy Collapsed") is his most cited paper (both Lynden-Bell and Sandage later were awarded the Bruce medal by the ASP, partly based on this paper). Eggen also introduced the concept of moving (or kinematic) groups of stars. Eggen moved to the Southern Hemisphere in 1966, assuming Directorship of Mt. Stromlo Observatory and pursuing the development of the AAT large reflector. He moved to Cerro Tololo Inter-American Observatory (CTIO) in 1977 where he stayed until he passed away 20 years later.

Olin Eggen was a vice-president of the RAS and a life member of the ASP. He was awarded the American Astronomical Society Henry Norris Russell Lectureship in 1985 and the Pawsey Memorial Lectureship of the Australian Institute of Physics. The Australian National University established a scholarship program in his honor, and the library at CTIO now bears his name.

He was an extremely prolific researcher, publishing some 400 papers during his 50-year career, with articles being written up until his death in 1998 from a heart attack. He was well known as a careful researcher, never observing unless it was perfectly clear, and always substantiating any claim he made in a paper. Eggen was also well known as a proponent of small-telescope science.

However, Eggen published only a small part of the enormous amount of data he collected over his lifetime. The AAVSO is most interested in this untapped resource. All of his observations were handwritten onto index cards that he kept in his office. Often, when a visitor would ask a question about a star, he would look up the coordinates, go to his card file, and retrieve observations that he had made of that target.

In early 2007, we made contact with CTIO to find out what had happened to that card catalog, mainly because we were interested in some observations that Eggen had made on a variable star but had never published. CTIO had taken the cards out of Eggen's office upon his passing, and had placed them in storage at La Serena. Since they were not serving any useful purpose in storage, CTIO Director Alistair Walker gave the AAVSO the entire collection of 78,000 cards on long-term loan. 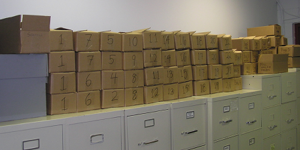 The AAS helped with a Small Research Grant in 2007 to pay for the equipment to scan the cards. John Menke has given a grant for the publishing of the scans.

Over three summers, we had summer assistants scan these cards, and are happy to report today that each and every card has been scanned! This web page contains links to all of the scanned images in PDF format.

The cards are all handwritten, and were a combination of detailed archives of photometry of individual stars, as well as miscellaneous cards containing scribbled notes. No two cards are in identical format, though some aspects are reasonably consistent.

As you can see, the basic information regarding the coordinates is given in 1966 coordinates (basically, coordinates of date, useful for old-style telescopes), along with magnitudes, colors, and dates.
"VE" stands for "Eggen V," which is actually "Johnson V." Nicholas Suntzeff explained to me that "Olin once got into an argument with a referee over the magnitude system he was using. The referee did not believe Olin's calibration and niggled him over this. So Olin, instead of carefully reasoning with the referee, just decided to call his magnitude VE and be done with it."

The second phase of this project was completed in 2016 - making the cards even partially usable by cataloguing the contents. Perhaps there is an RA order. Perhaps the order is by year of observation. Perhaps there is no order! However, each PDF file has 20 or so cards, and identifying the star names in each scan will enable a researcher to go to a specific PDF file for information on a star that they are studying. Volunteers selected a "box" or "bundle" at a time, and gave us a listing of the contents of each card in a box/bundle/PDF, from which we created a master index.

The final phase remaining is to take as many cards as possible and digitize those containing actual observations, transcribing them for upload to the AAVSO International Database. This will be more difficult, as you need to interpret the handwriting and what each figure means. Jack Crast is the lead on this phase of the project. Contact him and he will show you how it is done!